In addition, the expansion vessel in units with open vessel must be installed at a security distance from the operating pipes (or otherwise the connection pipe must be carefully cooled). The aim is to ensure the oil within the vessel remain at temperature under 65/70° C. It will avoid oxidation effects in contact with air and oil cracking, which will cause the loss of the oil characteristics resulting in possible obstruction of the plant.

Mixed cooling systems are suitable, in order to boost the reliability of particularly demanding cooling cycles.

Finally, in order to ensure the proper long term reliable operations of a diathermic oil thermoregulating unit, it’s crucial to make sure there is no air bubbles within the oil circuit at high temperature. The presence or air bubbles can cause cavitation that damages pumps and other components of the plant, and furthermore a very bad temperature regulation. Before a diathermic oil unit enters its full operating status, during its start-up it is suitable to carry out several air discharge cycles, making the circulating pump spin freely, while increasing the temperature up to 100° C and keep going on with free cycles increasing the temperature step by step, until there is no more air within the plant. In several years of experience in field applications, the 90% of issues during the start-up phase of diathermic oil thermoregulating units are related to a wrong air discharge procedure management. 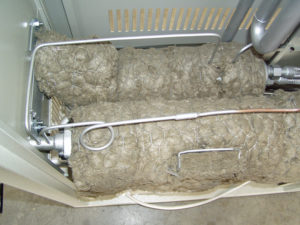