Aesthetics and no plume towers

Organizations are more and more sensitive to sustainability and environment safeguard. Thinking about it, there is an aspect that must be outlined: cooling towers are prone to get ugly along with time, due to the fact that they are exposed to external atmospheric agents, humidity and water dripping, scaling caused by carbonates and algae. All of this doesn’t fit the modern and often well-finished looking of green-oriented business facilities. That’s why installers deployed along the years a series of tricks and fancy ways to disguise evaporative towers, positioning them up on roofs or in hidden places, wisely resolving the problem. One for all: in ski stations, snow gun machines are often served by evaporative towers which are disguised on the hillsides by wood housing structures perfectly matching the surrounding environment.

Another typical visual element of a cooling tower is the white plume coming out of the top. Even if it can trigger a concern, this is simply water vapor, which therefore doesn’t cause any environment pollution at all. Anyway, there are some cases and applications where the vapor plume can lead to problems, for example if cooling towers are installed near landing strips of an airport area. In this case, the evaporative activity of a tower can involve visibility issues. The solution is to opt for cooling towers equipped with a wet-dry hybrid system, that not only eliminates the plume, but also offers the advantage of reducing maintenance costs. At the same time, another problem can be resolved, being the formation of ice on the streets and the ground during the coldest days generated by the descending vapor. An inconvenience that must be carefully reported, if not avoided. 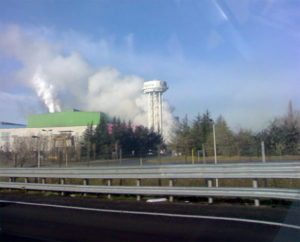