A first way to achieve thermal transfer between two fluids using heat exchangers employs two coaxial pipes inserted one inside the other, creating tube in tube exchangers. The first fluid flows within the inner pipe, while the second one flows in the ring-shaped space existing between the two pipes.

Shell and tube exchangers extend to the limit this method. These are composed by an array of pipes within which the fluid flows, and an external shell containing the pipes and within which flows the second fluid.

Another type is the coil exchanger, mostly suitable for corrosive and dirty fluids. They use the immersion of the thermal transfer system inside a tank that contains the fluid to be thermoregulated. The disadvantage here is that it requires several meters of pipe in order to obtain a sufficient thermal transfer surface to achieve the thermal duty.

Thermal transfer can also be achieved using external exchange chambers and cavities between walls, but this kind of machinery involves a complex construction and the thermal transfer is limited to the external walls, or at maximum at the bottom of the tanks containing fluids to be thermoregulated.

Plate heat exchangers that can be inspected and brazed plate exchangers offer both a high ratio between the volume and the thermal transfer surface.
These are composed by a pack of plates, obtained with cold pressing with different surface corrugation designs, presenting different angles (chevron angles) based on the thermal scheme that has to be achieved.
Fluids flow along the plates’ surfaces, running the channels formed between them, and plates generate a turbulent flow of the fluid even at low speed rates.

Plates are supported by a frame and pressed by a removable head of the frame itself.
Plate exchangers are modular, easy to disassemble for cleaning or further boosting purposes, they offer low pressure drops and, in case of losses, they avoid the mixing between the two fluids, thanks to the peculiar design of the gaskets. 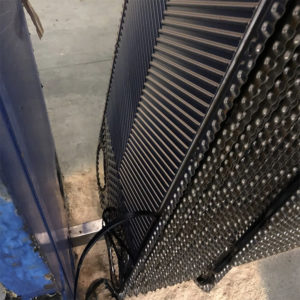