The first one is related to the basic functioning principle of towers itself, because cooling of working fluids is achieved thanks to the heat removal attained by evaporation of water. It is therefore impossible to avoid water losses due to evaporation. But it is instead possible to reduce as much as possible losses caused by drag and wastewater purge, adopting some smart tricks.

The amount of water loss due to drag depends on the speed of air’s ejection, and also relays on the efficiency of the droplets separators at the output (referred to the air flow) of the distribution nozzles group. The latest generation of droplets separators are able to limit drag water losses under 0,05% of the overall amount of the water cooled by an evaporative tower.

Hence, the overall water consumption of an evaporative tower can be considered as the sum of drag loss plus twice the water loss caused by evaporation. 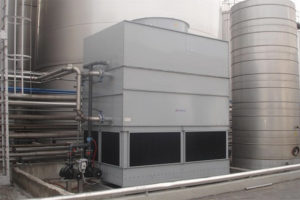