Hence, while in air condensers or air coolers thermal efficiency depends upon ambient air temperature, the reference value in a tower is wet bulb temperature that stands for the maximum amount of vapor that can be absorbed by the air circulating within the tower. It gives thus a measurement of the direct thermal exchange between air and water.

Wet bulb temperature is usually 4° to 6° C lower than ambient air temperature, so that evaporative towers are more efficient thermal machines for cooling purposes compared to a traditional radiator. For each kg of evaporated water, an evaporative tower dissipates an average of 600 Kcal/h, involving a water consumption that is directly proportional to the dissipation thermal capacity. During periods when wet bulb temperature goes under 10° C (as it happens for the most part of winter and often for a good part of both spring and autumn), an evaporative tower supplies cold water at 15° C, largely cold enough to satisfy the majority of industrial processes cooling needs.

The sizing of an evaporative tower is usually made aiming to dissipate the maximum possible amount of heat in the worst possible conditions of wet bulb temperature. This means imagining the conditions of the most hot and humid seasons, thus with higher wet bulb temperatures. The right and efficient functioning of the tower is therefore ensured also during the less warm moments of the day and during the cold months, using simple thermostatic controls that turn on and off the fans based on the temperature to be reached, or also installing inverters controlled by electronic regulators for the fans.

There are surveys offering wet bulb temperatures analysis for specified cities, even with data collected each hour for each day, throughout the most hot period of the year, for a timeframe of 10 years. The project, made by a main evaporative towers American manufacturer, allowed to create a very useful chart that is available online, an excellent start when designing a cooling tower.
An accurate definition of project ambient air temperatures is a guarantee of maximum performance of a tower. This can be calculated as the ratio between the real thermal gap achieved and the maximum theoretical thermal gap that could be achieved based upon wet bulb temperature project value. 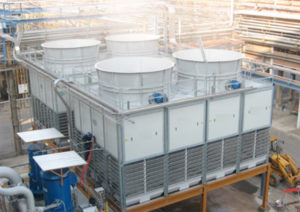