Thermoregulation in a laboratory pharma plant

In such of an application case, in order to bypass the problem ensuring the required thermoregulation, in Tempco we’ve realized a system composed by a temperature regulating unit, complete with heating section using armored electrical resistances and cooling circuit using a plate heat exchanger, served by an air-condensed chiller.

This is a small autonomous mono fluid thermoregulating unit, working with a temperature range of +8° C up to +140° C (using non-freezing solution it is also possible to reach negative temperatures levels). The overall system is autonomous and doesn’t involve water consumption. The solution, equipped with these kind of thermal machines, didn’t require any support in its start-up phase, because once the necessary connections are provided, it is sufficient to fill up the circuit – a 10 minutes operation -, and in further 10 minutes the system is commissioned.

The thermoregulating unit employed has a pressurized circuit that feeds in a closed-circuit the small mixer utilized in the laboratory. The feeding circuit of the thermoregulating unit/mixer system gets automatically loaded and pressurized by the chiller, which is filled with mains water (or with non-freezing solution in case of below-zero temperatures). This way, the overall plant gets automatically filled-up with a unique loading provided by the chiller.

Once the overall system has to be cooled, it is sufficient to modify the set point of the unit, which provides to switch-off the heating resistances while keeping open the cooling solenoid valve, introducing refrigerated water inside the exchanger and thus cooling the entire system. 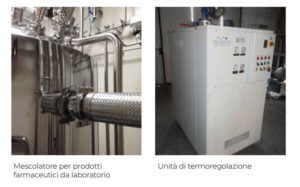